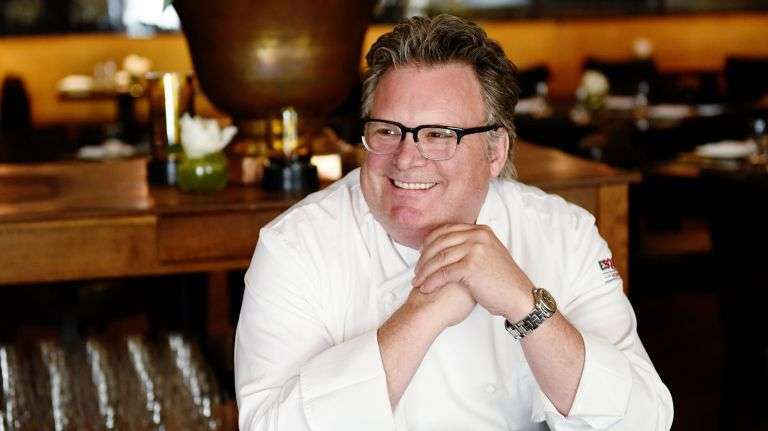 Red-salt-aged beef; strips of bacon suspended from a wire by clothespins; crabcakes whose crunch is supplied by thin rafts of pretzel — these are just some of the whimsical creations on the new menu at the hotel now that legendary chef David Burke has taken over all food and beverage operations. (The hotel’s famous Sunday brunch buffet will also be enhanced with some Burkean touches.)

The hotel’s restaurant, Polo Steakhouse, has been renamed Red Salt Room by David Burke; the Polo Lounge is now King Bar by David Burke. Executive chef  Ari Nieminen remains in place and will execute Burke’s vision with the existing culinary team of 130.  It’s a reunion for the two chefs, who knew one another at The River Cafe in Brooklyn, where in 1988 Burke burst onto the scene at the age of 26, earning three stars from The New York Times.

Burke is known for an approach that is equal parts playful and scientific. It took him years to perfect a technique (now patented) that uses Himalayan pink salt to control and enhance the dry aging of beef. Now diners entering his restaurant in Garden City will pass an entire pink wall of salt bricks; huge chunks of it are suspended in glass cases that flank the threshold; candles on each table are embedded in little pink-salt cylinders.

The dining room has been lightened and brightened, the ponderous chandeliers replaced with modern globes. The bar has been given a “soft renovation,” with new artwork and accents.

Burke has also exerted his influence on catering and room service. “It’s critical,” he said. “Some chefs say, ‘I’m not getting reviewed on room service, so it’s not that important.’ But the hotel guest is just as important as the restaurant guest.” He has spent as much time perfecting the hotel’s burger and turkey club as he has on the slow-roasted chicken that is laboriously butchered, brined and baked to keep the white meat moist.

Burke has been a fixture on the national restaurant scene for decades. From The River Cafe, Burke went on to open Park Avenue Cafe, davidburke & donatella (with Donatella Arpaia), Fishtail by David Burke (all in Manhattan), as well as restaurants in Chicago, Las Vegas and in Foxwoods Casino in Connecticut. He was also featured on Food Network’s “Iron Chef” and Bravo’s “Top Chef Masters.” He currently runs Tavern62 by David Burke in Manhattan as well as restaurants in James Hotels in New York and Chicago.

It’s been a busy spring for Burke. Last week, he announced a collaboration with caterer Andrea Correale, of Elegant Affairs in Glen Cove, to launch David Burke Off-Premise Catering, which plans to handle events In New York City, the Hamptons and New Jersey. In May, he opened Woodpecker by David Burke, a wood-fired American restaurant on West 30th Street in Manhattan.

He can’t be everywhere at once, and he’s come up with strategies for “Burke-ifying” his projects. “We know food costs, labor costs, menu creation, branding,” he said, “but we also have to show people how we do things.”

In Garden City, he has seeded the kitchen and dining room with Burke veterans who will stay for the first few months. “First of all,” he said, “we didn’t come to Garden City to fix something that’s broken. The idea is to enhance what’s here.”  And he understands that there is a pre-existing culture. “I’m coming into someone else’s house,” he said. “We’ll increase the tempo and the volume gradually.”